Enviva Leader Gets Fired Up 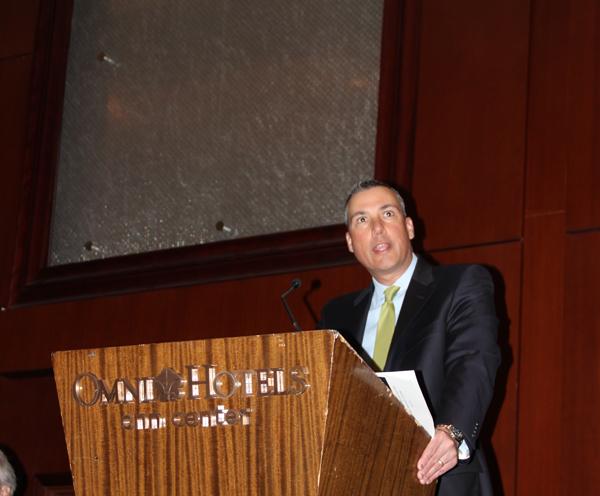 While protesters chanted outside, Enviva President and CEO John Keppler challenged his audience inside to celebrate the accomplishments of the young renewable wood energy industry, especially its substantial year-to-year growth. Keppler was one of the keynote speakers at the fourth Wood Bioenergy Conference & Expo held last week at the Omni Hotel at CNN Center in Atlanta, Ga. The event attracted 320 industry personnel representing industrial wood pellets, biomass power generation, in-woods harvesting and biomass fiber procurement personnel. They heard nearly 40 speakers and walked through 70 equipment and technology exhibitors in the Grand Ballroom North.

The event is hosted by Wood Bioenergy magazine and Georgia Research Institute.

Keppler noted that wood pellets demand increased 13% worldwide in 2015 to 27.6 million metric tons. “Thirteen percent year-on-year growth!” Keppler shouted. “How many industries in the world are doing that?” He noted that wood biomass accounts for 44% of renewable energy in the EU.

Looking ahead, Keppler stated, “How you create the long-term durable outcome for this industry is the challenge,” adding that the goal is long-term affordability. He also addressed Enviva’s conservation and certification programs, “sustainability is the foundation of what we do,” and noted that wood pellet production accounts for only 2.4% of fiber removal in the U.S. South.

Meanwhile, outside, protesters apparently representing the Dogwood Alliance pointed to photos of old-growth cuts on coastal bottomlands as indicative of the “deforestation” committed by wood pellet producers such as Enviva.

“They simply don’t have a grasp of what is actually happening on the ground,” commented Conference Co-Chairman Rich Donnell of the protesters. “It’s not about old-growth. Companies such as Enviva are harvesting small pulpwood trees and meanwhile managing the forests for continued growth and carbon sequestration. But at least these kids aren’t hanging out in the back alleys. They just need to be better informed.”